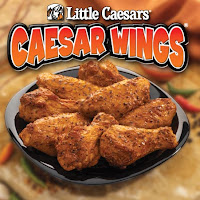 Yes I said it.  Little Caesars sells wings.  I guess one would have to expect this seeing as wings and pizza are like peas in a pod.  Now to put you in the right frame of mind here, I had been cutting wood all day long and was pretty hungry when I pulled up to Little Caesars Pizza. After ordering my family's usual two pizzas, I decided to also pick up some wings. (Those pictures on the windows are how they sell to a hungry man, remember that, it is always the pictures that sell).  First problem with the wings, and I consider this to be a big one, they charged me .75 cents for a small thing of ranch dipping sauce. No sauce was provided for free. So basically you get 8 wings for $5.99 plus tax, plus if you actually like to dip your wings in some sort of sauce (like I do) then another .75 cents for that. So for around $7.15 you get 8 wings with sauce.

OK now onto the actual wings.  I personally like my wings to be more on the crunchy side, which to me is a sign of being cooked (baked or broiled). My first problem with the Caesars wings was the slimy texture of the wing, which tells my brain "Not cooked". I am not saying that the wings were not cooked, I am just saying that is how it appeared.  I am not sure how these wings are cooked, maybe boiled. Once I was able to get past the problem of the texture, the wings were actually not bad, not awesome but not bad. Probably something I would expect from a fast food joint serving wings.  They are definitely not homemade.  The sauce is claimed to be a "buffalo style sauce" but I would probably say it was more of the Louisiana wings style, or maybe a mix of the two, which is where the problem lies, the sauce doesn't know who it is and it does nether of the two well.  Ether be 100% buffalo style, or 100% Louisiana style.  With that said, the wings were good enough to feed a hungry man, but would I ever go there just to get some wings, more than likely not.

Posted by Xylene at 4:40 PM No comments: