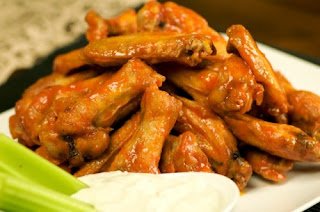 I decided that I was going to post some of my favorite chicken wing recipes, as well as a few I haven't tried yet.  If anyone has a good chicken wing recipe they want me to try please let me know and I will cook them up and post the recipe here.


The first recipe is my fail safe wing recipe.  It is very easy to make and tastes great. I don't really know where I got it from, but this is what it is now. 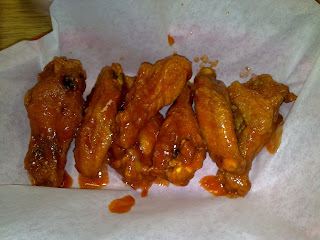 Jayson's Louisiana Wings:
1. Move rack to the top shelf in the oven, turn oven onto broil.

2. Clean wings and place on a foil covered cookie sheet. Sprinkle with salt to taste.


3. Place wings in oven and cook until brown, turn each wing over until the other side is brown.
4. In the meantime put the hot sauce, butter, and vinegar into a sauce pan. Once the wings are about 5 minutes from being done, turn on the stove and heat the sauce over med-low heat.

5. Once the wings are cooked to the desired texture, dip each wing into the sauce until completely covered.  Place in a bowl and eat when ready.

What makes these wings even better is the blue cheese dipping sauce.

BlueCheese Dipping Sauce:
Mix all ingredients in a bowl, adjusting the amount of each to taste. 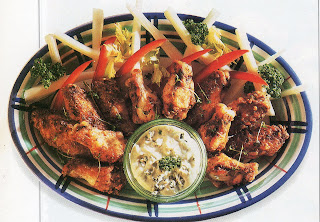 The next recipe comes from one of my favorite cook books. "Classic Home Cooking". They are more of a dry rub chicken wing but they taste great none the less.

1. Wash and clean chicken wings and set aside.

2. In a large bowl combine the oil, lemon juice, onion salt, garlic powder, cumin, oregano, chili powder, paprika, cayenne pepper, and black pepper to taste. Brush the mixture over the chicken, cover, and leave to marinate in the refrigerator, covered, for at least 1 hour.
3. Line a large baking sheet with foil and place a rack on top. Arrange the chicken wings in a single layer on the rack, and cook in a 400 degree F oven for 40 minutes, or until browned, sizzling hot, and crispy.
4. Remove the chicken from the rack and drain on paper towels, Serve with red pepper strips, celery sticks, and blue cheese dressing and garnish with parsley and radish sprouts if desired. 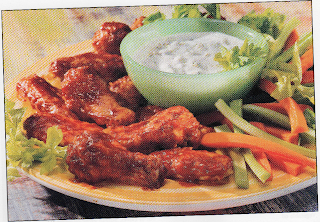 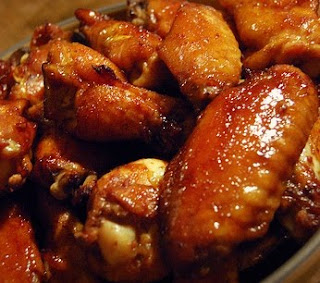