The Philadelphian - Sometimes things are better as memories


I use to work in Sandy and I would often eat at The Philadelphian weekly. I have been looking for a time to go back and eat again, but the 40 minute drive has always deterred me. I have been craving their Philadelphian style cheese steak for a while. I remember it being the closest thing I have had to a "real" Philly cheese steak since moving back to Utah from Philadelphia. Well that time finally arrived this past weekend when I was in Sandy for my Nieces birthday party. 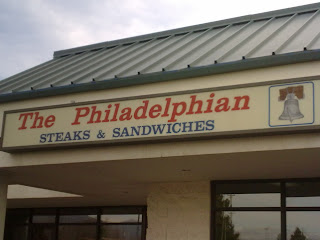 I don't know if my concept of a "real" cheesesteak has been skewed with time, or if my own standards of what I expect from a Philly has changed, but I walked away from The Philadelphian extremely disappointed. 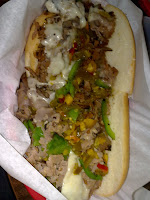 I am not even sure if I could call their "Philadelphian" a Philly cheesesteak. It was nothing like I remembered. I think my closest comparison would be the Arby's cheesesteak. The meat was pleasantly seasoned but was thinly sliced which doesn't lend well in my opinion to a steak sandwich. Deli meat should never be described as steak. One problem with thinly slicing the meat is that you loose a lot of the natural flavor and juice of the meat and it ends up tasting dry. I love a nice juicy cheesesteak, one that as you eat it juices drip onto your hands and into your plate. Consequently my sandwich was dry and the small amount of provolone cheese didn't help the cause. The rest of the sandwich was topped with what I can only guess were fresh vegetables like bell peppers and mushrooms (Their produce sat in open boxes in the dinner area for all the customers to see, so I can assume this is also what was on our sandwiches.) and even though they were fresh they had a very odd flavor to them that both my wife and I noticed. 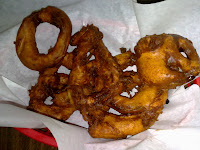 One bright note of my experience was that I ordered the home made onion rings and I really liked them. They were hand dipped in a homemade batter and deep fried until crispy. I like the batter they used and it was very refreshing to have some onion rings that didn't seem to be store bought. The ironic thing about the onion rings is that most people don't like them, but love the sandwiches so maybe I was having a backwards day.

Usually I wouldn't comment on the cleanliness of the building but in this case I feel like I have to. I haven't eaten in this dirty of a restaurant since I was in Tijuana Mexico. My wife commented that she wondered how they passed their health and safety inspections, this place made a truck stop restroom look clean. The tables were not clean, there was food all over the floors the garbage cans were overflowing and I didn't even dare to touch the counter-tops. Oddly enough I don't think the place has changed in all of those years since I ate there while working in Sandy, the filthiness of the place didn't bother me back then, but yet it did now. It might have had something to do with my family being there with me.

Overall I went home greatly displeased with my meal and embarrassed because I had talked up The Philadelphian so much to my wife and she couldn't even finish her 4 inch sandwich. The best part about having eaten there is that now I don't have to think of ways to make it back like I did before.